There has been a lot of buzz around blogland about the January markets going on now.
Several of us have just returned from buying trips. 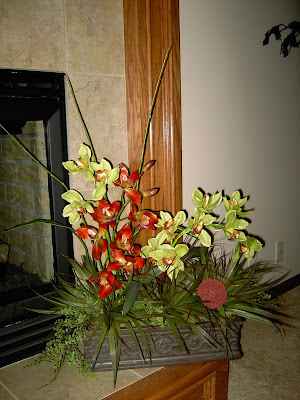 Kristen at Kristen'sCreations recently mentioned how orchids are very much in. I really noticed that too. Today I'm showing you some orchid arrangements I have made and placed in homes or businesses. This one was placed in a ladies restroom. The designer had specific demensions for this. It couldn't be too busy or too "in the way". 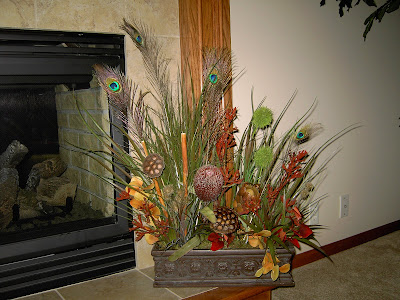 I suppose it was for some silly reason like people having to wash their hands. :) This was the version for the men's restroom....oops, it doesn't have orchids in this, but notice those ever loving peacock feathers ~~ again! :) 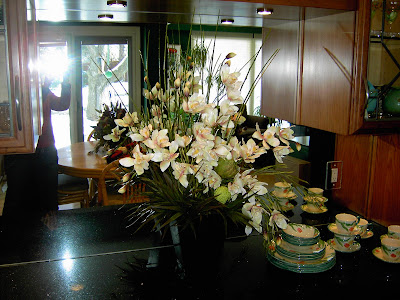 These white orchids went in a kitchen for a photoshoot for a new kitchen cabinet design contest. All that white was stunning. 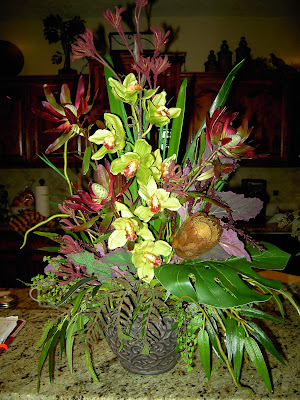 This one was for the same home as the one above. I always place the arrangements on my kitchen counter to give them the once over before sending them on their way. For some reason it is easier for me to see what changes they might need when they are away from my work station. In place ~~~~~ 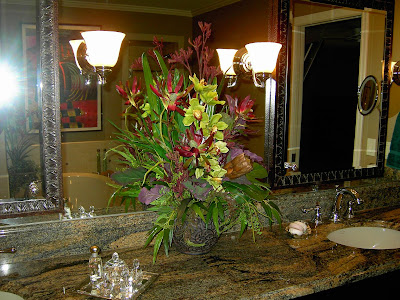 Same home for the photo shoot only in the bathroom. Isn't this room almost magazine ready???
These red orchids along with other tropical pods and flowers really showed their personality. 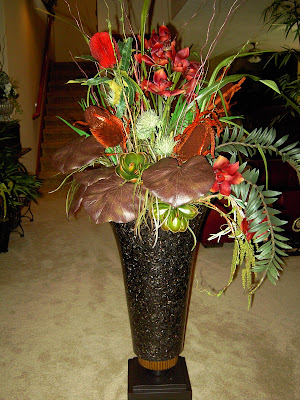 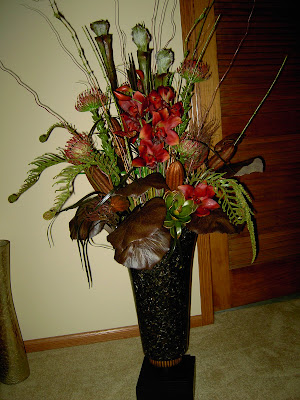 The other is the counterpart for the same customer. Let me just tell you, these containers were to die for. The designer provided them for me to fill. I was a bit nervous handling them because of their value. They were so heavy.
These bright yellow "look at me" flowers are called dancing orchids. I have really grown to love these. Aren't they pretty in the red vase? This was a display in my old house for a spring show I was doing. 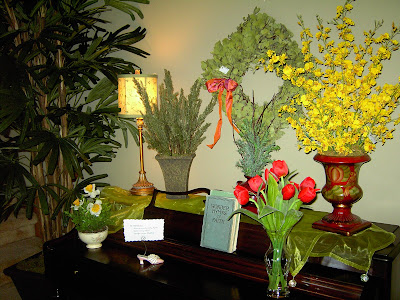 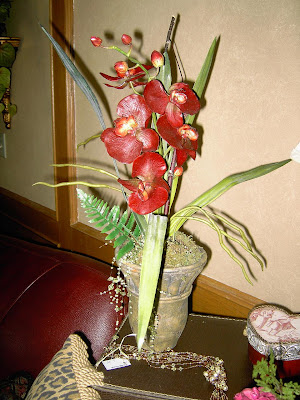 Just a widdle bitty red orchid. Someone found a home for him too. 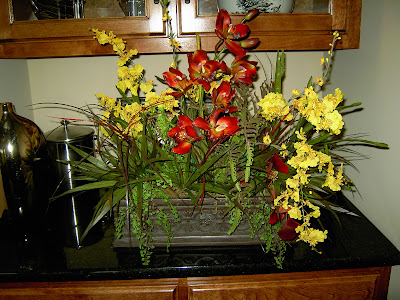 More dancing orchids with bold red ones. Such a nice contrast.
I'm sure there are many of you who excel at growing real orchids that are eye poppers.
For those of you who can't, there's always The Silk Thumb version!
Posted by Designs on 47th Street at Monday, January 26, 2009

Hi Donna...don't look now, but your talent is showing! LOL...
These arrangements may be faux, but they are REAL-ly gorgeous!
;-) Bo

I love the orchid arrangements. You are very talented.
Hugs, Terrie

They are all so pretty! I was looking at my arrangements the other day and almost all of them have orchids in them, except the rooster one in the kitchen.

We used to order most of our orchids from American Best and Aldik. They both have so many to choose from. Where ever you're getting yours....they look great!

Since the shop closed, I just have to buy things locally. There are still customers I do things for every now and then. I have to admit....I am enjoying being off work, but might go somewhere part time sometime. I'm putting it off as long as I can.lol! Kristen

I dont' know which arrangement I like best, they are all so pretty.

The containers that the designer provided for you are gorgeous.

Thanks for sharing your creations with us.

Stunning! I love the use of peacock feathers and am glad that my orchirds are STILL in style!

You just OOZE style and creativity!

Orchids are one of God's glorious creations for us to enjoy! CHEERS Michele

Oh my goodness...beautiful!
Have a good day.

Yes, the pots are Mera Vic. I can't order from them now. So, I both them locally at the drug store. And they were still not so expensive.

Do you ever order from Sullivan's? They are out of Sioux Falls. I love their orchids. That's were mine come from. Around here we don't actually put other faux flowers in the arrangements with them. But, I really like it. I have noticed that where I live it's most sleeker lines for everything. It's interesting to see what other parts of the country are doing.
Hugs, Terrie

Donna, the arrangement and containers are gorgeous! You're so talented.

I love orchids and your arrangements are awesome...I stick with the faux ones!

~BEAUTIFUL DONNA!
LOVE ALL THE COLORS.

THANKS FOR VISITING MY WW POST! YOU'RE SO KIND. ;)

I just read your comments on my blog today....you silly girl. Let's trade a few compliments daily, OK???? LOL!! I will be glad to show you that arrangement sometime, but it's better far away, and won't look nearly as gorgeous as yours do!! ;)

Hi Donna, Thanks for visiting my blog. And what a small world! We live in eastern NC, also. We are half way between Wilmington and Myrtle Beach. So nice to meet you! Look forward to coming back! ~Rhonda :)