Another Way to Be Creative

When my oldest daughter turned one, I decided to get into cake decorating. I think I took a class through Wilton and purchased many of the icing tips. When my daughters were little I often times purchased the pans in the shape of something...Big Bird, Cabbage Patch Kids, etc. Now that I have grandchildren I see there is a new world of options through googling for cake shapes.
This was the latest creation last Sunday. 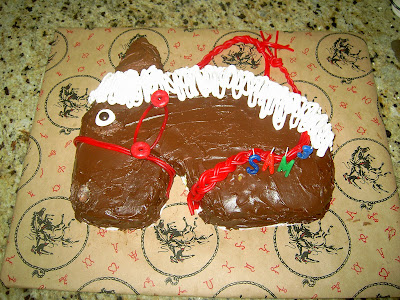 Little Sammy is into horses and wanted a "Horsey Cake with those guys", he kept saying. We weren't sure what he meant by those guys, but wondered if he meant cowboys. 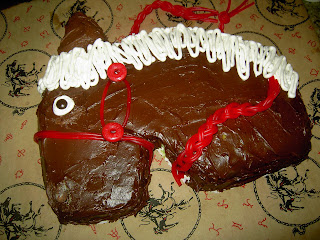 I didn't have any cowboys but did find Indians and some pilgrim people that I stood up around the cake. It must have worked because he looked thrilled with his horsey cake. 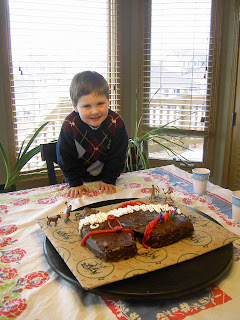 This is the same little boy
One year ago when he
started loving trains.
Can you see his tongue sticking out of his mouth? It was so cute to watch him look at all the details. This train cake was a hit with all the children obviously because of all the candy in the cars. 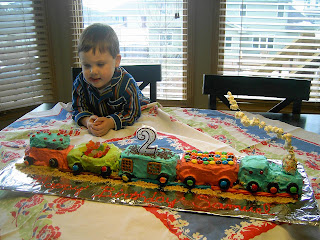 A couple of years ago, I made the pirate cake for my oldest grandson as he was having a pirate party. This cake had lots of details and was a little nerve wracking, but fun to put together and create the ship. The brown around the outside edges is brown sugar for sand. 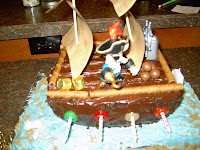 The look on his face was worth all the time it took making this one. Look at the little boy in the back ground. I giggle everytime I see this picture. 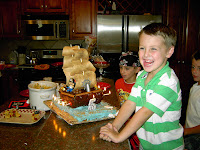 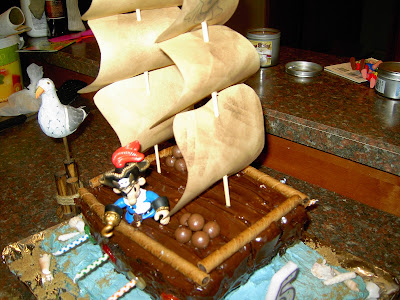 I'll see y'all when I get back from Dallas.
Posted by Designs on 47th Street at Wednesday, January 14, 2009

Lucky grands to have such a talented grandma! You did a fabulous job!

Have fun in TX!

How talented are you??? Great job...and the look on his face, priceless !!
You have the most adorable Grandkids :)

Wow! Beautiful cakes! You are right...the look on the other little boy's face says it all...cake envy!! lol Have fun and tell us all about it when you get back...Debbie

Have a great trip! Love your cakes. They and your grandson are too cute!

Very cute cakes..all of them! My daughter made a train cake very similiar to your's for a grandson's birthday recently. Love the way you strung the popcorn as steam...very clever!

Hi Donna,
Have fun at the show. If you see a company named CRI (silk florals) look up Sean McCarthy, he's my rep and tell him Carol from Meadowsweet said hi! This is their first time at the Dallas show! He'd get such a kick out of that! Have fun!

Donna, I love to decorate cakes, too! We have so much in common! Your cake is adorable. Please stop by I have something for you!
Hugs, Terrie

I am so glad that you found me! I am looking forward to more visits as I will be doing the same!

Look at how talented you are with the cakes! I just purchase mine from the Bakery. (LOL)

Hi Donna...you are one creative lady...I love seeing fancy-schmancy
cakes like these & what child wouldn't love them too! ;-) Bo

Donna...you are SO craetive!!!! Isn't that fun to make the "little guy" so happy! What a happy feeling....Have a good time in Big D!

Donna, these are wonderful.. what a talent you have.. have a great trip.. talk when you get back.
hugs ~lynne~

Wow Donna, These cakes are unbelievable! You can do it all!! I'm sure you won't see this before you leave, but I will be at market on Sat. and Sun. You can find me in Cash and Carry I'm sure. LOL!! Maybe I'll see you there. Kristen

Donna, just found you through 19 Butternut and you had me at "faux"!!! Ha ha - I've written about HGTV and faux flowers on my blog and you are a gal after my own heart! Love your blog and sense of humor!... Donna @ An Enchanted Cottage

Soooo cute, you are right, there are many ways to be creative.

I just can't believe how big he is!!! He is one lucky little man to have such a multitalented Gramma!

What a cute grandma you are, and what lucky grandchildren. It's my first time at your blog, and your home is beautiful. It was so nice stopping by. I'll return again.
Thanks

One class at Wilton and you made these darling cakes? I took a class and didn't catch on so well! These cakes are too cute!

That is a really fun cake! How creative! :)

I had missed this post. What darling cakes, and how clever you are to make such special cakes for your grandchildren. You're right, the look on their faces in these pictures says it all-precious grandchildren. laurie

I'm back...I just wanted to say that I thought your cakes are cute! The "popcorn" smoke on your train cake was creative! Also, the candles sticking out the sides of the pirate ship like cannons! How inventive is that!! Believe me, I enjoy making my grandson his "kids" cakes too! My other cakes are my hand at trying to be "artistic"! LOL. Hugs!!