Only having a few minutes to stop in to one thrift store today, I was pretty pleased with what I found.

My friend Char over at Grace and Favor has done a really fantastic tablescape for the 4th of July.  You must go take a look.  I noticed her pretty footed glasses.  My mom has some similar.  When I saw a similar set of four for $2.00 I knew they were going home with me. 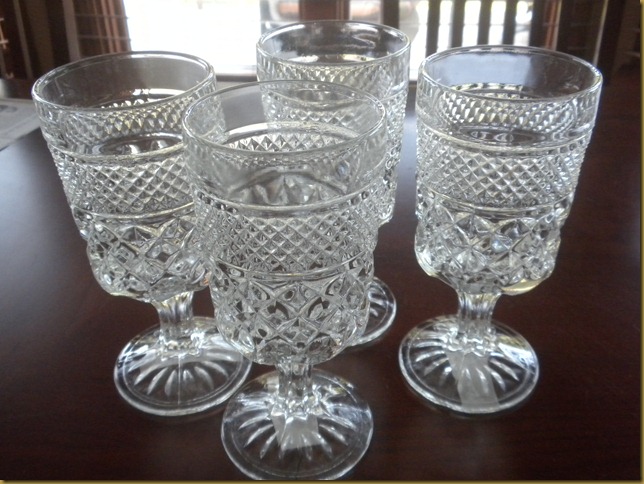 I also found this sweet, precious little girl’s cup.  It wasn’t priced yet, as someone had just donated it.  The lady told me I couldn’t buy it until they had a chance to price it and they were about to close.  I told her if I couldn’t buy it now, then it would be gone the next time I came in.  I must have had the best pouty look on my face because she changed her mind and said I could have it for $1.25!  Yah!! 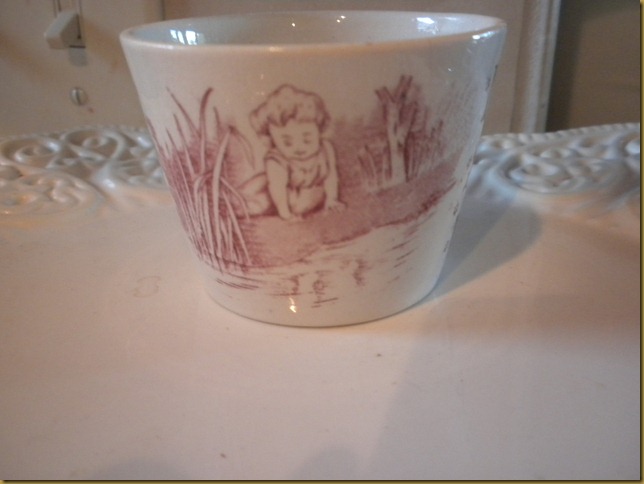 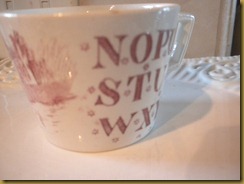 The entire alphabet wraps around both sides of the handles.

It’s as sweet as it can be! 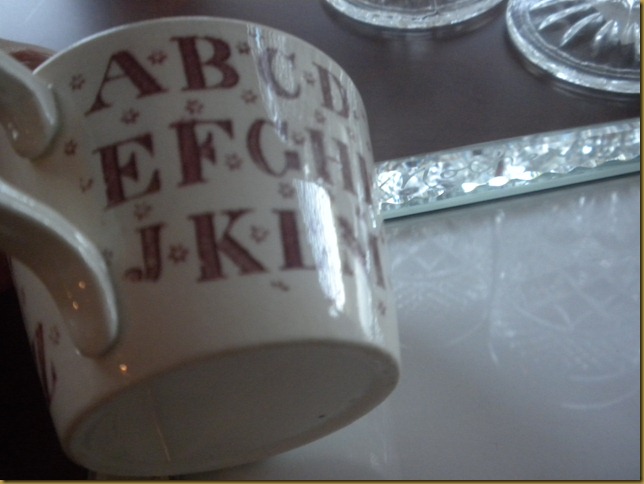 As if I need one more frame…..

I loved the fact that this one is mirrored and it has Mother inscribed.

It can hold a picture of my mother or perhaps my daughter with her children. 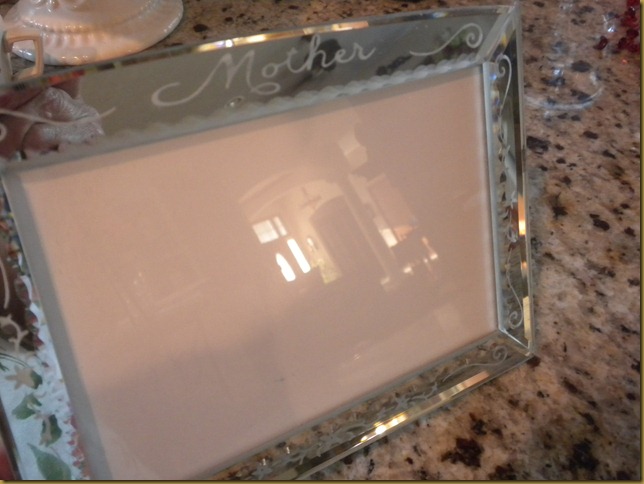 Changing the subject, I want to let you know about a product I use with my business.  It’s a water look mixture that looks so real.  It really looks as if you have cut some flowers from your garden and placed in fresh water.

I will say this is just a bit tricky.  You must have everything all set up and ready to go, stems cut just so.

My first box must have been old as the mixture was thick and turned cloudy when I poured it.  I ruined a small vase as there is no turning back once you have poured.  I was able to save the flowers and start over again.

I purchased this box at Michael’s. 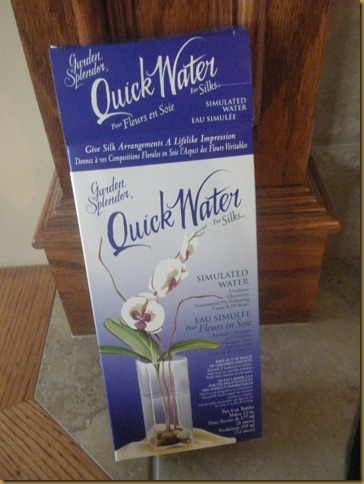 I don’t like that wire showing through on this stem, but there is a story behind it.  Originally this peony was set in a very, very shallow vase (and the bottom of the stem didn’t show).  My daughter was going to give it to a friend for her birthday.  Well, Little Max accidentally broke the vase and she ended up giving the friend something else.  I told her to save the flower and I would see what I could do.  Still looks pretty good, and I’ll just give it to Angie. 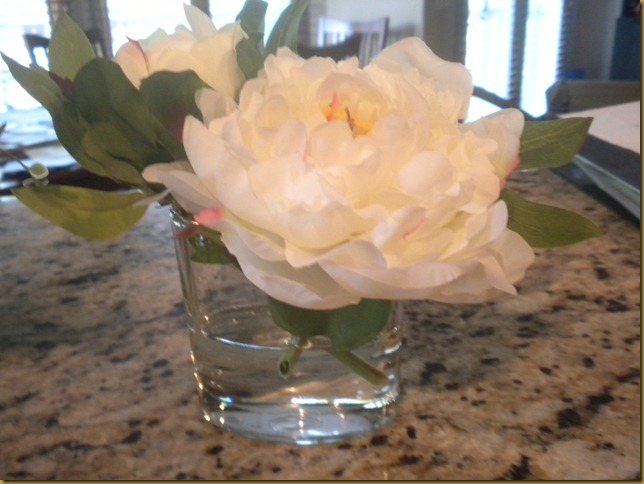 These tulips are for a customer.  I have used tape as a grid of sorts to hold the flowers in the position I want them until it sets up.  It will look much nicer without the blue tape! 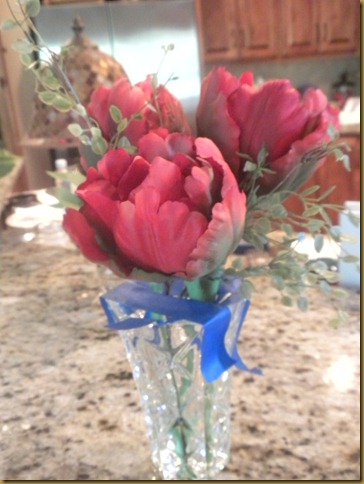 The picture doesn’t do this justice, but here is a gorgeous, big ole fat hydrangea, filling this container entirely. 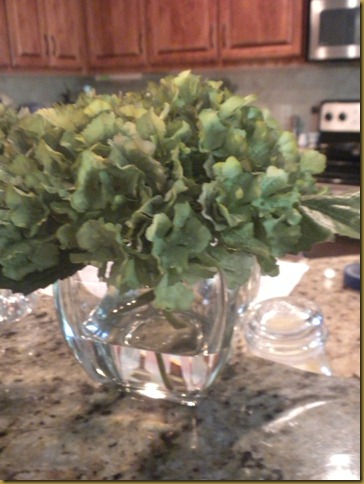 I had just a little bit more of the water mixture, so I quickly grabbed another little vase and added the second flower on the hydrangea stem. 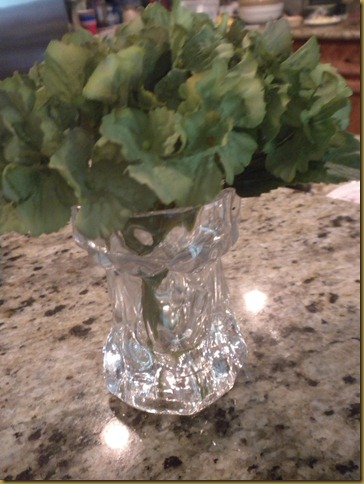 The next pictures are showing the REAL stuff….nothing faux about this water below!

Mine are blooming too, so I put them in this REAL VASE, with REAL WATER!!  I’m not ALWAYS FAKE, friends!!! 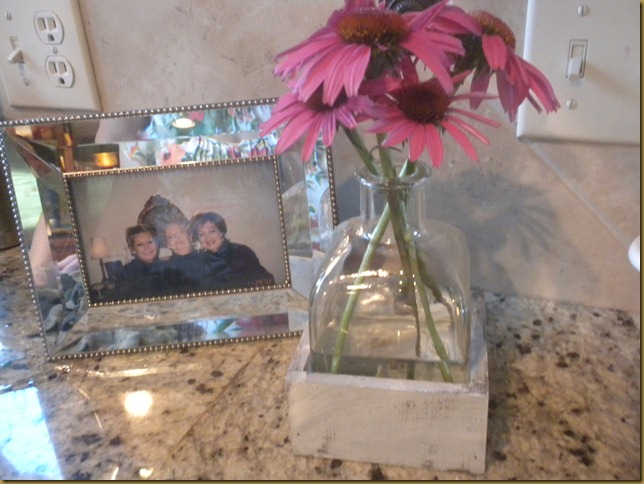 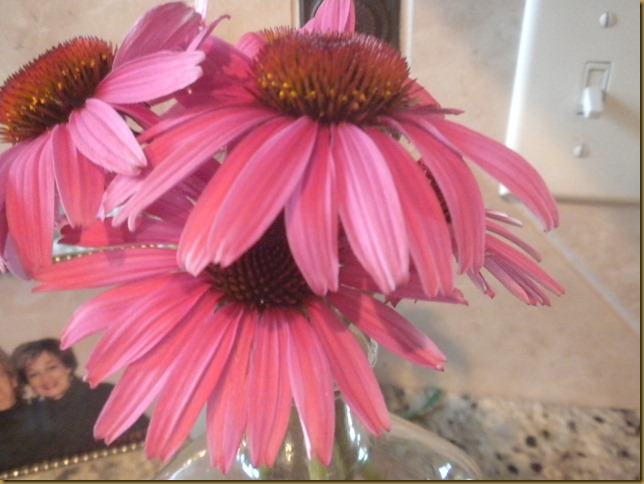 This little vase, complete with it’s own tray was found at a local store having a great sale! 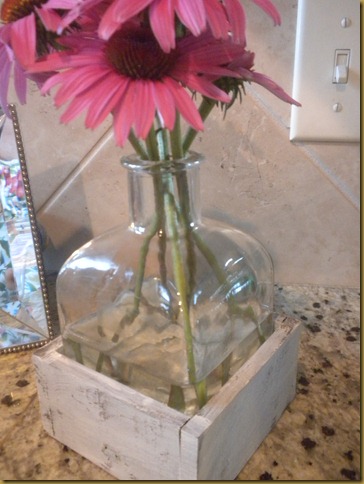 It’s always nice to have you stop by 47th Street!

I am joining Glenda at Tootsie Time today, showing one thing growing in my yard right now.

Go over and take a look at all the pretty yards.

Love your glasses, Donna...so pretty! And thanks fro telling us about the fake water! Lovely flowers in your real water, too! lol Happy 4th!...hugs...Debbie

So that's how you do fake water. Good to know. Your cone flowers are lovely too. The bees are enjoying them now and the birds will enjoy the seed pods later.

I have always wondered how this acrylic looking water is added to an arrangement! Thanks for sharing!

You fresh flowers are lovely.
I don't think I will see any coneflowers around here until late August. Love then though!
xx
Alison

I like the faux water. I made a vase of flowers with it for my mother in law. A while later my niece knocked the vase off the counter. The vase broke and the water stayed in shape. My niece told my MIL that the water was bad anyways cause it stayed in shape. Lovely arrangements!

DONNA!! I NEED TO GET SOME OF THIS FAUX WATER! I have seen it before in displays, but never knew you could by it! THANK YOU for coming to visit my post last night! It really is so fun to encounter new beautiful and bright faces!

Have a lovely weekend, Anita

Love those footed glasses. I have some in an amber color and would love some clear in clear.

That water trick is amazing! I'm going to have to look for some of that!

Thanks so much for the shout out Donna, I appreciate the compliment from someone who does such beautiful tablescapes.

I've always been curious about the fake water too and I'll be giving this a try soon. Looks like you had a good day treasure hunting, I'm in love with the alphabet cup.

Hi Donna! what a great post! First I love that sweet little cup and it looks very olden. The fake water stuff is great! I used something similar years and years ago and made a few arrangements. Yours are just fantastic and you're a pro.
No worries about visiting. I've been gone from Blogland for about 3 weeks and just the past days have gotten back.
Have a wonderful 4th!
Be a sweetie,
Shelia ;)

I would arm wrestle you for that adorable little ABC cup..
Love all your great finds..
xobj

I would have pouted, too, if I could have walked out with that little ABC cup...it is so cute!!! Love the fake water...I've seen it, but never even thought about trying it myself. Your footed glasses are in the Wexford pattern by Anchor Hocking. They're great looking!!!

Hi lovely lady.
I love the fake water sweet lady~~ and your Great find the glasses sweet. I hope you and your family have a Great 4th of July.
xxoo Diane

I love that alphabet cup. I am crazy for anything with the alphabet on it.

love that little cup...and the price was perfect. I'll need to check out that water stuff...very cool. I like how real it looks. you do the neatest stuff!

Donna, Love your vases with the faux water. The way you arranged the flowers is just perfect. I especialy like the peonies and the pink coneflowers.
Hope you have a great day,
Babs

Just found your blog! You found some lovely things! I am your newest follower!

Love all your bargains! You really had to have all of that. :)

This is my first year to have coneflowers and I am just loving them. Every time I go outside, the butterflies are all over my two plants!

what is diazepam used for diazepam 5mg - diazepam dosage elderly

Anonymous said...
This comment has been removed by a blog administrator.
February 8, 2013 at 8:06 PM

Anonymous said...
This comment has been removed by a blog administrator.
February 9, 2013 at 7:05 AM