Mothers Day was not a traditional one this year, but it turned out to be quite lovely.  The date turned out to be the same one that our men had something planned.  They did ask in their most convincing way permission to go ahead with their plans and took Christian, my oldest grandson along with them.

Angie (my oldest daughter) and her two youngest sons and I traveled to see my Mom and spent a very quiet Mother’s Day with her.  It turned out to be picture perfect.  I spoke to my other two daughters on the phone.  We all wished we were together.

It was a year ago today that Mom fell and broke her hip.  She is one determined woman and although she has slowed down she is still very active and has a great attitude.  She still loves her flowers.  We decided our favorite thing to do would be to help her get her flower beds ready for summer flowers.

First we went to the greenhouse and upon entering I immediately thought of my friend Char over at Grace and Favor ~ A Life Worth Living.

Char, your pink bike is much cuter than this one! 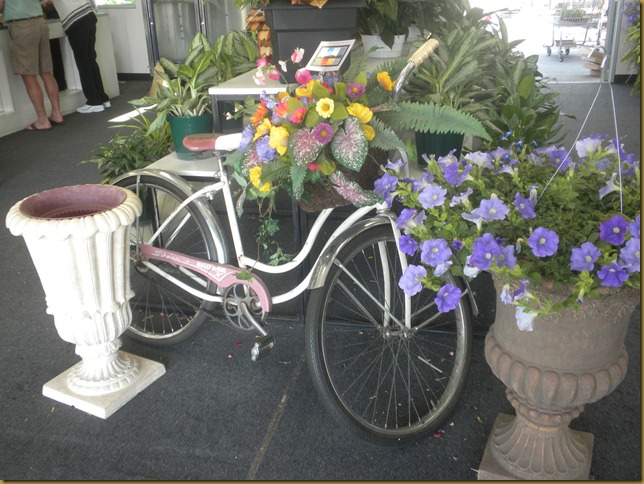 We spent a long time (actually until they kicked us out upon closing!) looking for just the right flowers. 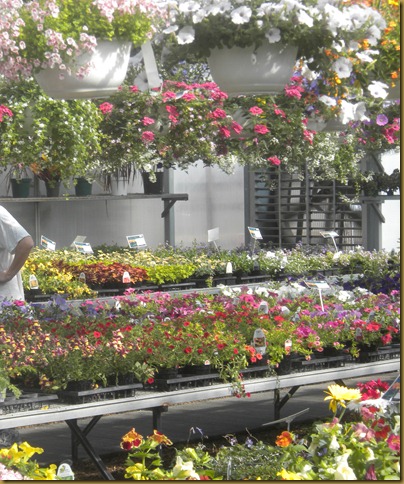 Some of us daydreamed about water fountains and with the curiosity of a three year old wondered why in the world people threw money into the water.

Even more curious to him was why in the world wouldn’t we let him climb in to retrieve some of these discarded coins! 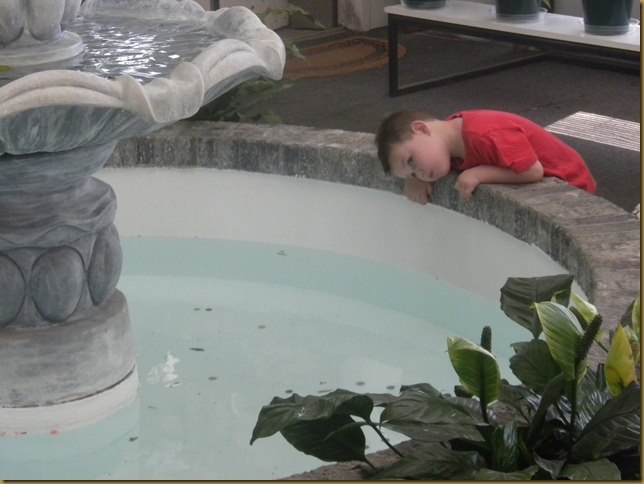 We got home and went straight to work….

We edged and weeded 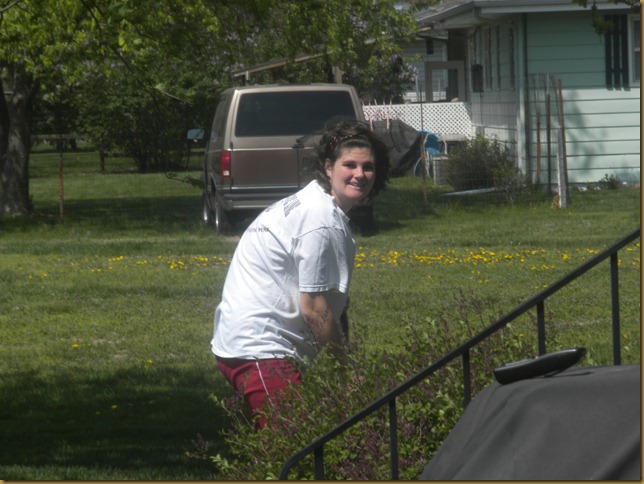 Some watered while others contemplated where flowers should go…. 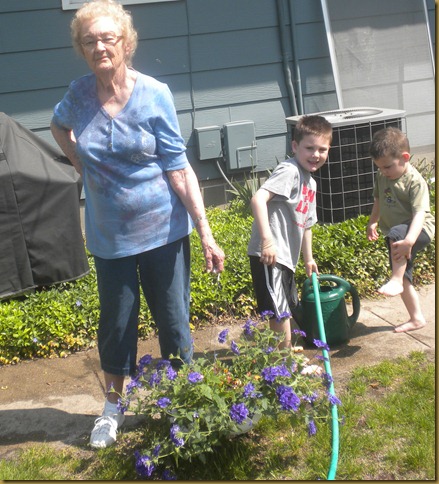 We watered some more 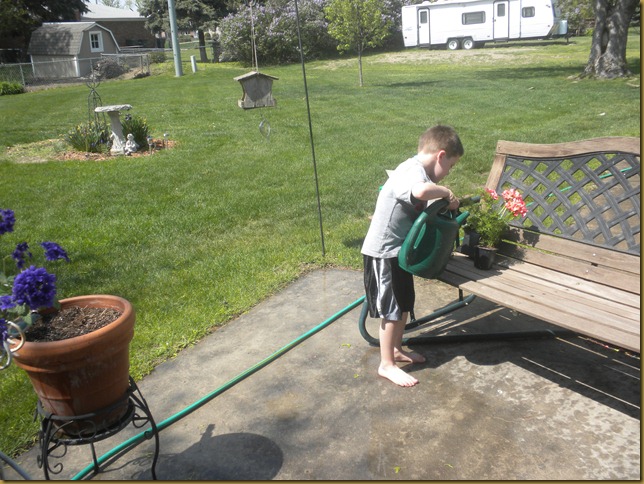 We talked to neighbors and met new dogs 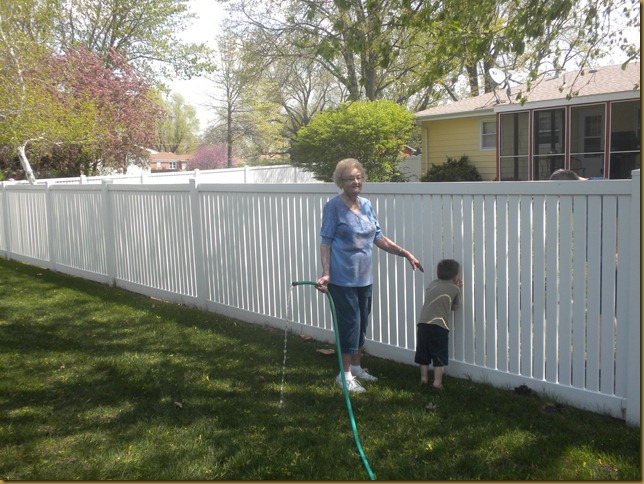 And then we watered some more 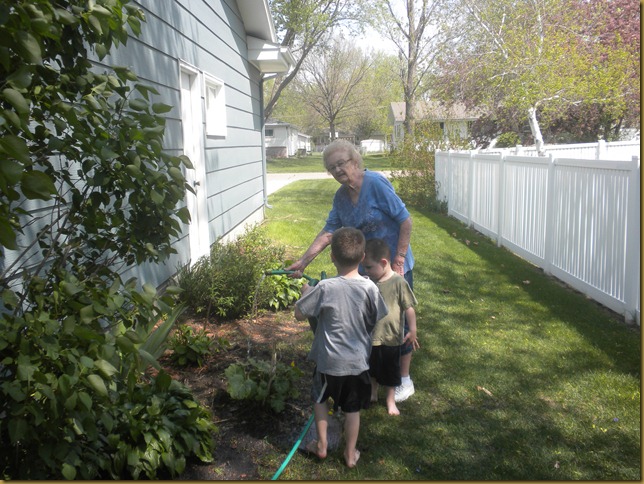 We picked several bouquets of lilacs from a neighbor’s alley 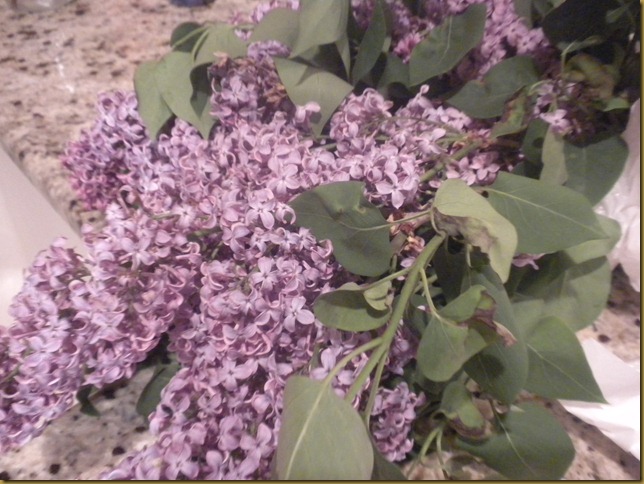 More than anything we enjoyed each other’s company and were very thankful we three mothers and four generations could be together.

I hope you enjoyed a beautiful Mother’s Day.

Oh...it sounds like you had the perfect Mother's Day, Donna. I would rather spend time in the garden more than anything else. It looks like you had beautiful weather, too! I got a kick out of seeing your grandkids help!

Have a great week!

Oh, Donna, it looks like you had so much fun. I'm glad your mom is doing well in spite of her injury.
You made lots of good memories!!!

How sweet -- I'm sure that your mother was most delighted!

How great to see your mom doing so well. And look at the boys being so helpful. Sounds like a perfect time together.

oh what a wonderful day you had. I picked some lilacs today from my neighbor.

Oh, how wonderful!! I know your mamma appreciated that day so, so much!!! And what good modeling for those little boys...they will do that some day for YOU!
Suzanne

Donna, that is undoubtedly the best Mother's Day gift your sweet mama could have received. The gift of time and attention to our parents is worth more than any thing we could buy. I bet your mama enjoyed the day with all of you and those sweet little boys.

We spent Mother's Day working in the yard as well! Your Mama is just the sweetest!