I started out Looking for White Pumpkins….

Good Monday Morning!  My posts are getting further between as we are getting nervously close to my daughter’s wedding in Mexico!  Now I can say it’s next week! 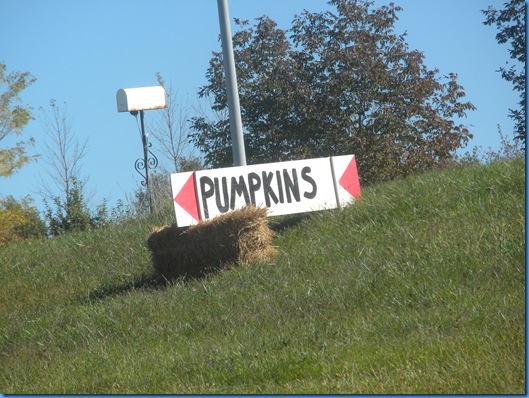 Now that we are in to October I am on the search for white pumpkins to use at the wedding reception that will be held back in our town the first weekend of November.  Not knowing how well they will keep, I have an ample supply of faux white pumpkins I’ve been collecting too.  My friend Susan spotted a pumpkin sign as she was driving quite a distance from our houses last week.  She called me and said they had some white ones!  So….I took a little road trip and lookie what I found!

This variety is called Blue Plate.

They do have just a slight hint of blue grey coloring.  I love the shape as some almost tend to be flatter and more of the Cinderella look. 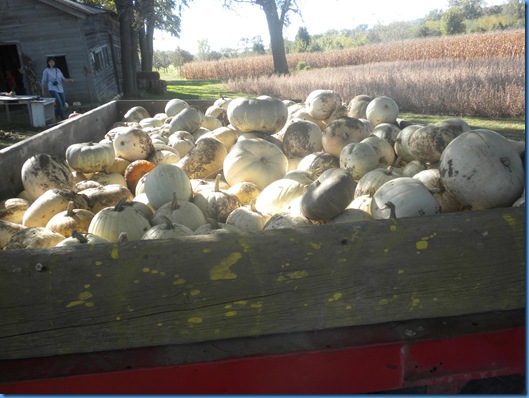 The farmer was honest and told me he didn’t know how well these would work by November as they tend to turn yellow.  As long as they don’t rot, I figured these could turn into glittered pumpkins or I might even be able to spray paint them a creamy white. 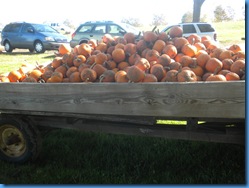 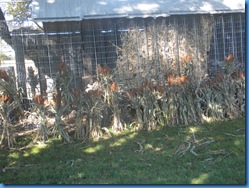 If you look at the picture of the white pumpkins you will see fields behind.  I didn’t take my camera with me out there but we were allowed to walk out and pick other gourds, pumpkins, etc too.

I got all these for FREE!!

Can you believe they didn’t charge even 3 for $1.00 or some little amount?

I picked up the little white ones to use in a clear glass cylinder vase. 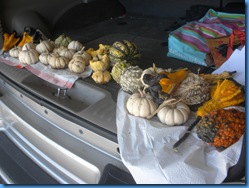 Here is a close up of the Blue Plate Pumpkins 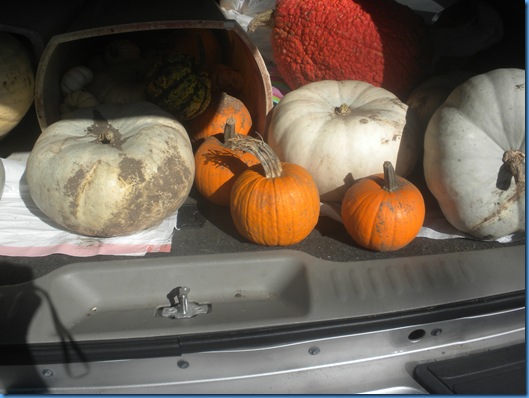 This warty thing was just too fun to pass up. I found it in the field. 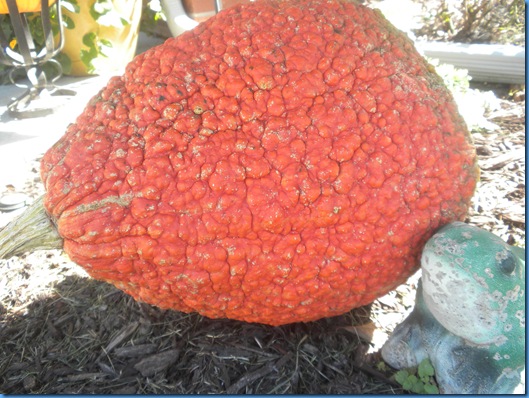 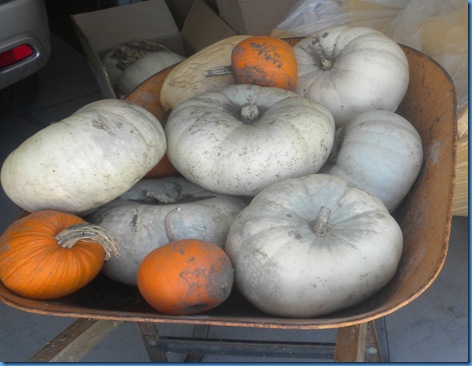 They were really filthy from the field so Maggie and I went out to clean them.

I read where you shouldn’t saturate them with water, but to clean the soil off so bacteria isn’t sitting on the skin. 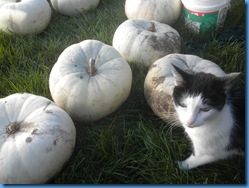 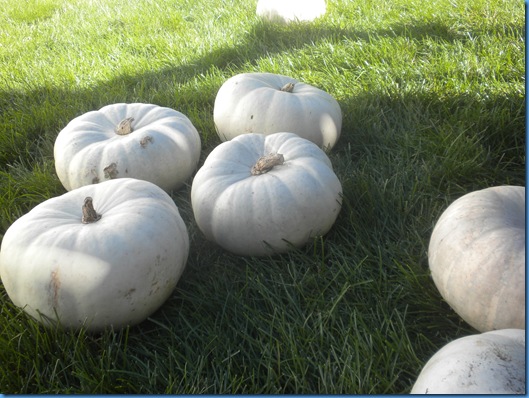 Wait!  The very nice farmer called me to say he was picking a different variety of white pumpkins that he would hold for me!

My daughter and grandsons went out yesterday to check this fun place out again! 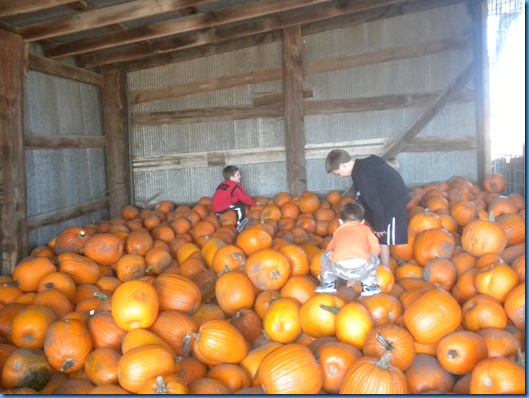 Secretly hidden in this little Quonset the door opened up to more white pumpkins for my selection! 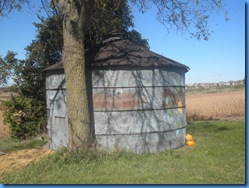 I am beginning to think the white ones don’t get very big but they will be fine as centerpieces. 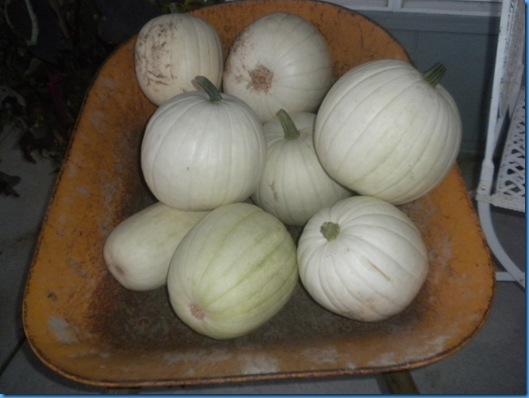 Also new were these little green ones. I actually think they are gourds.

They look so “Martha”, don’t they? 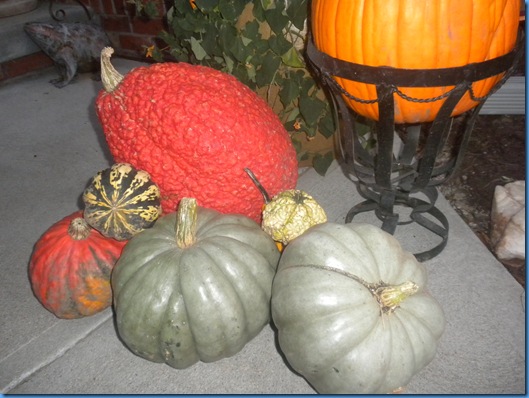 My final picture to show you are these very large vertical pumpkins.

The picture doesn’t tell the story as the one on the left measures about 18” tall and about 13” wide.  The one on the right is just a bit smaller.

The same for the little Cinderella  pumpkin in front.  I can’t believe his prices! 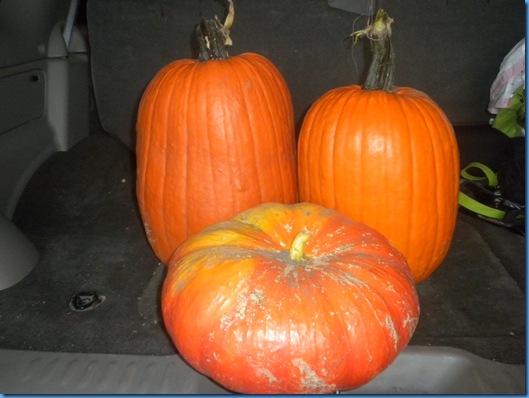 I feel better having found these pumpkins because they will be a big part of our decorations.  I will be sure to show you pictures later on.

If anyone has any hints on preserving pumpkins, I would love to hear.  Some say to spray with acrylic and some sites say not to.  I do know I will keep them inside so they don’t freeze in a cool, dark place.

Labels: Pumpkins of all types

lucky, lucky girl...those are amazing. I especially love Warty and the bluish gray ones, as well as your boat load of whites!! I know you must be so excited!

Donna, what a great place to visit and you did hit the mother load of pumpkins. Bless the farmer's heart for taking such good care of you and great pricing too.

I can't wait to see how the tables come out, I know they'll be spectacular.

Hi Donna! What a great idea to use white pumpkins as a part of the tablescapes! I can't believe it's nearly here! You must be so excited. Be sure to take lots of photos so we can see. I know it will be lovely! Have a great week...hugs...Debbie

So pretty, I think I heard somewhere you could spray them with hairspray, google it.

Wow just a week away huh, all the best to your daughter and I wish you safe travels in Mexico.

those prices are incredible....whoa! Love all the many varities. I can't wait to see pictures of the wedding. Enjoy every moment. (I once read that if you pin prick holes around the stem, it allows the pumpkin to dry out slowly so it won't rot....check it out though before you do it, I don't want to be responsible for ruining your pumpkin crop!)

Wow, you did luck up.

Gosh, I do love it when I get over here to visit...
I can't wait to get my pumpkins.
I don't know...but I sprayed my pumpkins one year and they did great. I will do it this year too because I love the way it made them look. I just hope I remember what to spray them with. I know it was clear with a bit of a shine to it. Loved it.

okay, I have serious Pumpkin Envy...I have never seen the squatty white pumpkins before...but I do, I'll be draggin' at least 1 home with me...

Yes - we did find some of the same pumpkins. What great deals you got! I love your final picture - the pumpkins are gorgeous.

Thanks for stopping by and visiting my blog.
Alissa

Look at all of the amazing pumpkins Donna. Score!

Wow! You hit the jackpot! Pumpkins in our area are a smidge spendy this year. Seems our weather affected them....