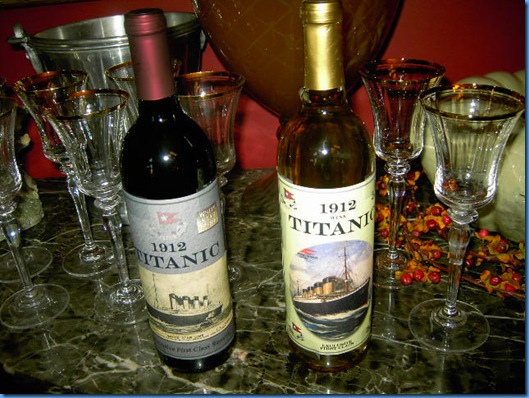 Recently I shared a tablescape I created at my daughter and son in law’s home for their Mystery Dinner Party.  The story line was based on the Titanic.  The Dinner had a real life twist that I will tell you about at the end of the post!!

They had so much fun with this and many of you asked to see the costumes.  The party wouldn’t be nearly as much fun if the guests didn’t dress their parts so well.  These guests had great fun coming up with attire for this time period.  They even looked on line to get a general idea of the way men and women dressed during this era.  The common denominator must have been smoking because most came with cigarettes or cigars. 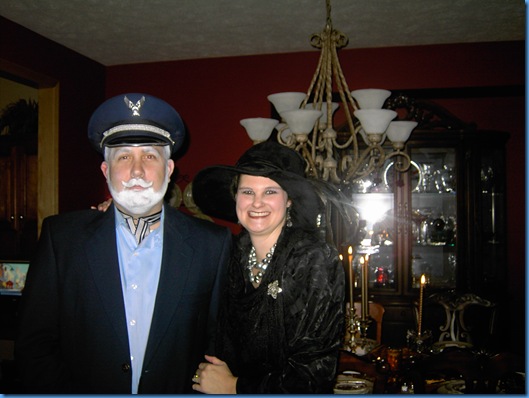 and his lovely wife

Mr. Harrison sported an eye glass (can’t think what they are called) but didn’t have it on for this picture. 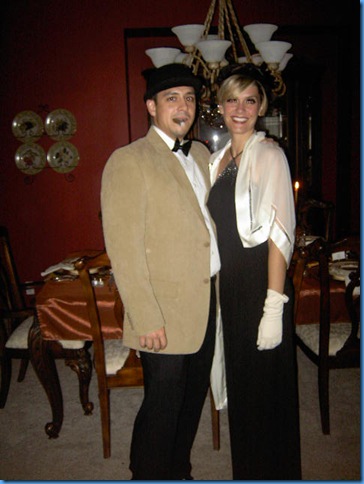 Molly had a darling black hat perched on the side of her head that doesn’t really show up in the picture. 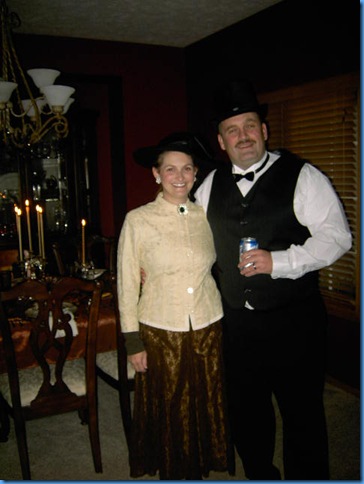 Keep your eye on them! 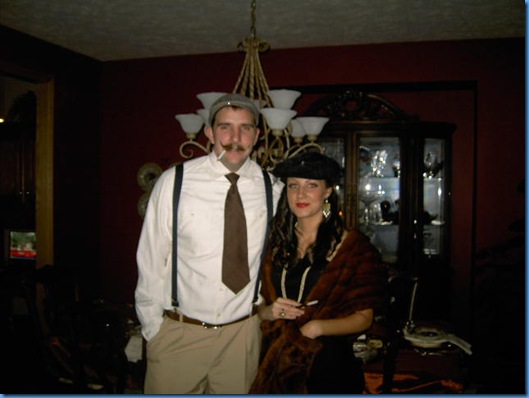 This game was found on ebay and even came with wine labels to print off.  The seller was wonderful to work with. 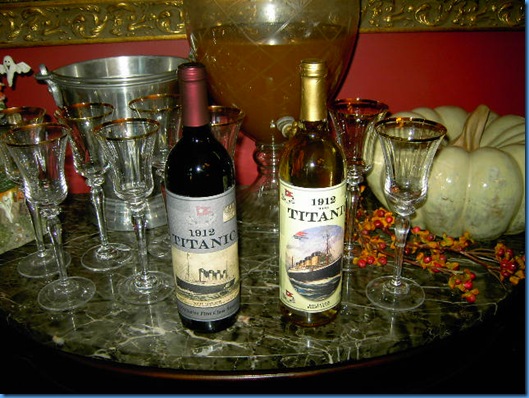 I’ve been waiting for one of the guests to send me a better group picture as mine is rather fuzzy. 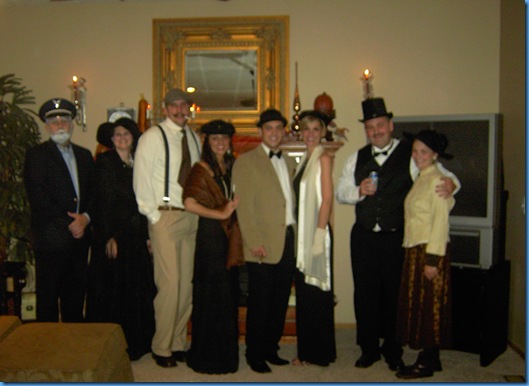 Two of my three daughters ~~~~ 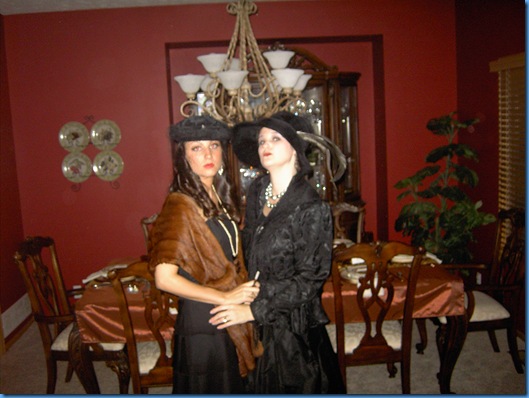 Remember I told you the evening had a real life twist?? 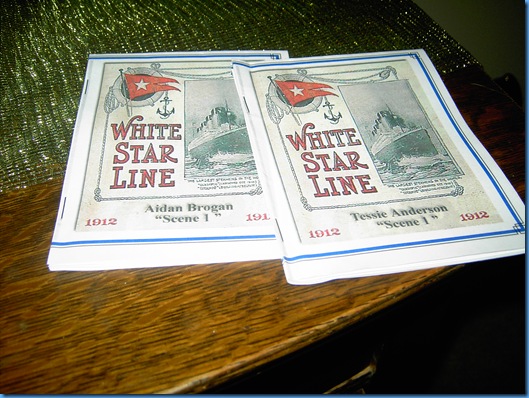 Any ideas?  Any guesses?? 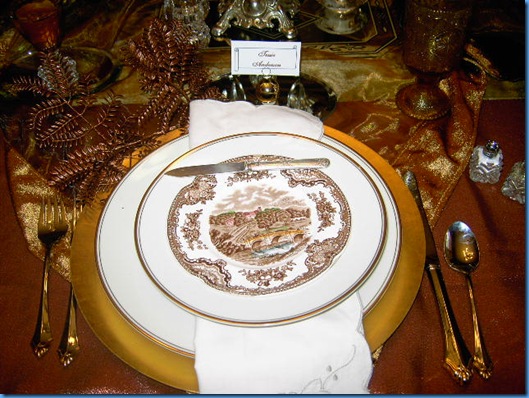 This tall man named Dan in real life proposed to my daughter during the dinner!!  At first Jamie thought it was part of the skit but looked at her sister and realized it was for real!  She said YES! 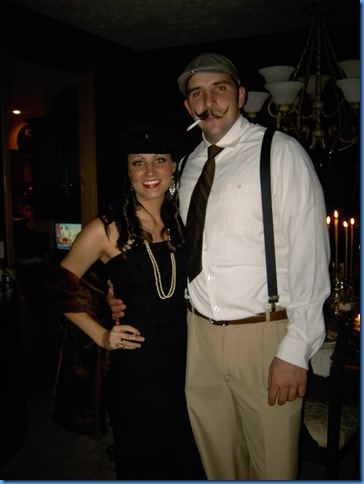 No doubt!! This will always be an evening to remember!!

oh my goodness Donna...an engagement! how exciting for you, your daughter and the whole family. Congratulations...you'd better get busy on those wedding arrangements! Yeah!!!

What a fun evening. I love all the wonderful costumes everyone wore. The wine labels are just such fun. Congratulations to your daughter, what a happy evening and with memories to last a life time. Hugs, Marty

Hi Donna! Oh, congratulations to your beautiful daughter on her engagement! She'll certainly never forget the proposal! :) What a cute party idea and all the guests look so cute and a little sneaky! This was a great post. Thank you for sharing it with us.
Have a safe and fun Halloween.
Be a sweetie,
Shelia ;)

What an exciting post ... real-life drama and romance! The table you created for the event was spectacular. I enjoyed seeing how you used the faux pears in the "Birthday Girl" post as well.

And .. we've now seen three generations of beautiful ladies in your family! Good genes obviously run in the family!

Have a Happy Halloween!
Bill

That's got to rank up there with one of the best proposals ever!

I loved looking at everyone's cute costumes. This would be a really fun party to host!

Oh that is such a cool story! The party sounded awesome! Congratulations!

What wonderful news! I love the costumes.

Wow!!! What an event: costumes, characters, mystery, and a PROPOSAL! :) I guess this means we get to read some wedding posts???? How exciting.

Is it called a monocle?? (the eye thing?)

Oh Donna... congrats to your daughter.. what a wonderful proposal..What an event...thanks for including us in the excitement of the engagement...
Happy Halloween...hugs ~lynne~

WOW--what fun and a proposal!! I love it!! One of my friends has a large family and they have a mystery night at this time of the year.

Wow! You are right! What an evening to remember. How absolutely fabulous and what fun! ~ Lynn
P.S. Thank you for your vote. :)

As if the dinner party weren't great enough.............a romantic proposal! Wow! How much fun that will be telling over and over for years to come!
I've left you an award on my blog. Hope you come pick it up.
Mary Lou

Oh, I knew this was a fun event, but the proposal just made it even more memorable! Wasn't he clever to do that during the skit. A moment they will be able to tell their grandchildren about. I love it. All of the couples look so cute, and your daughters are so pretty. Love the costumes. laurie

Congratulations to your lovely daughter on her engagement! A wonderful party and beautiful guests! :)