My daughter and I had a vision and it came together beautifully.  Our family loves fall and while we were planning the reception we were determined to use mostly real white pumpkins in with our tablescapes for the reception.

I have been collecting white urns and silver trays for close to a year.  With the help of my floral friend Damon, this all came together for us. 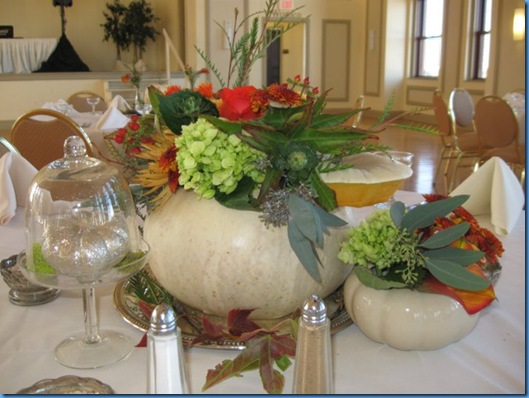 Some pumpkins were glittered 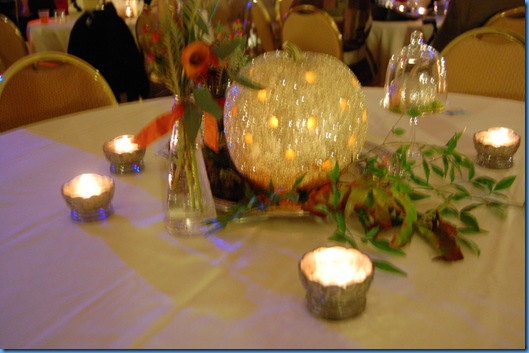 Each table had a silver tray, a pumpkin and flowers.  Most of the trays I picked up at thrift stores.

Some were in my own personal collection 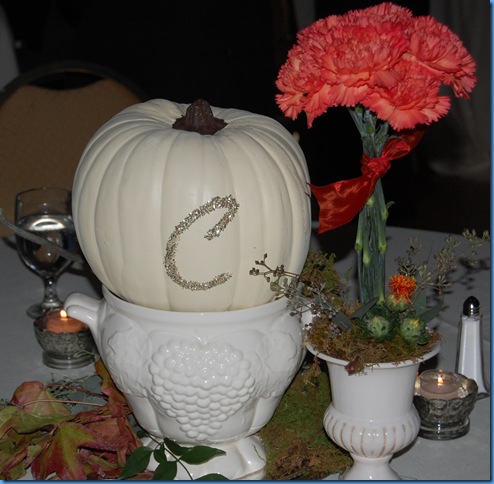 Some were monogrammed with glitter 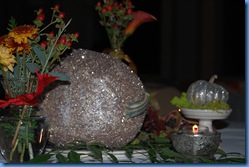 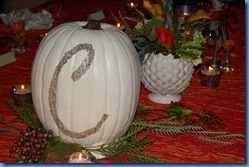 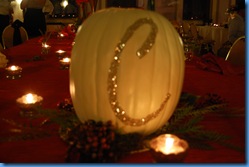 We rented this giant candelabra for the head table.  It had a silver glittered Cinderella pumpkin perched on top. 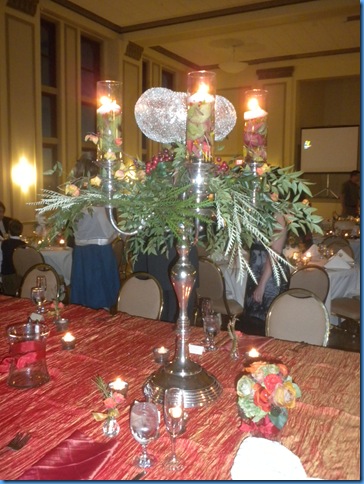 Some pumpkins were carved and used as vases

The table below was Mr. Brown Socks and my table with the vintage bride and groom 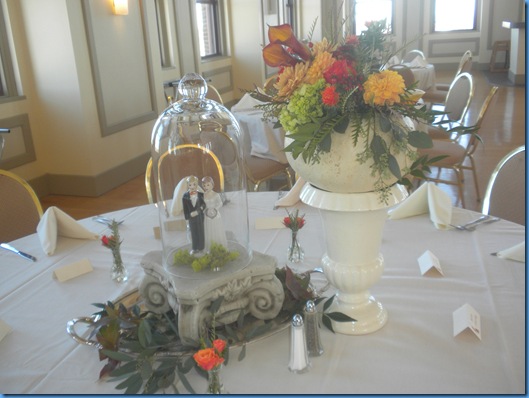 The big, tall urns were from thrift stores 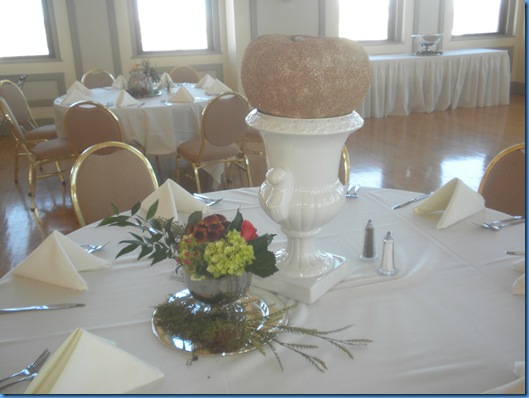 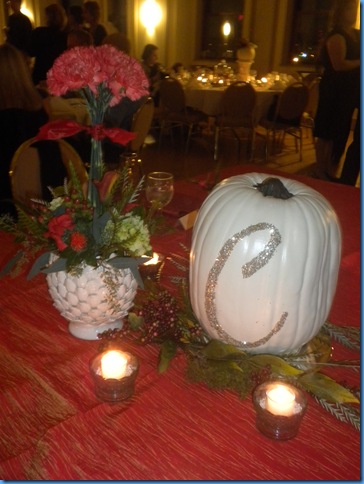 I LOVED these monogrammed pumpkins with the largest pumpkin having a “C” for their last name and staggering sizes for the initials for their first names.

I didn’t get a lot of pictures at night but so glad we have this so you can see how pretty it was illuminated.  Christmas lights were inserted from the bottom to light these. 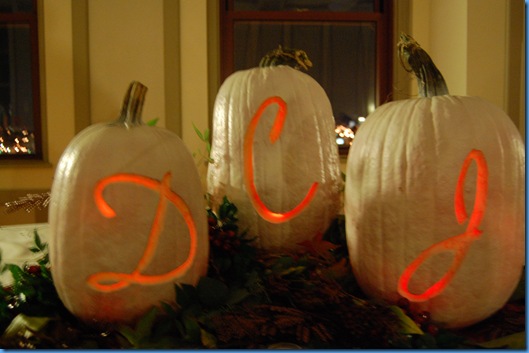 Notice lights of the city in the background.

This was the prettiest room! 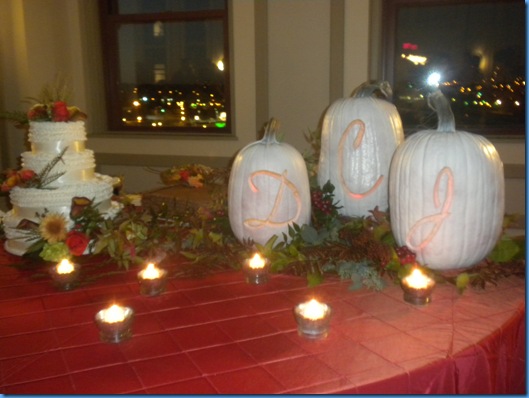 These apothecary jars were filled with flowers at the bar 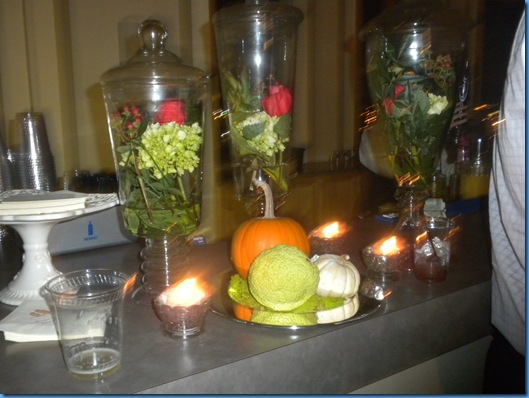 Such FUN we had! 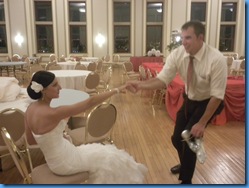 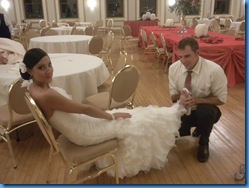 The little mercury candle holders did have votives in them as time drew near for the guests to arrive.  We used white barley to fill in. They were take home favors for our guests. 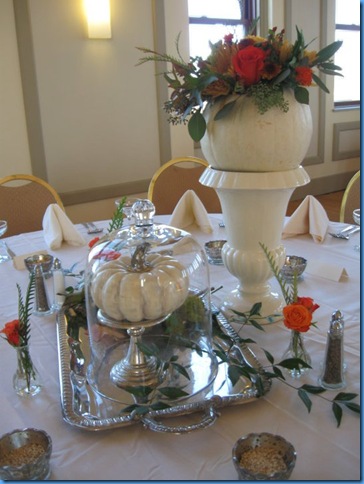 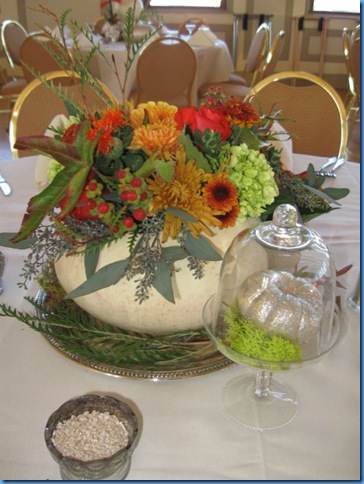 Most all of the pumpkins were real.  They held up great during the five weeks I babied them in my basement! 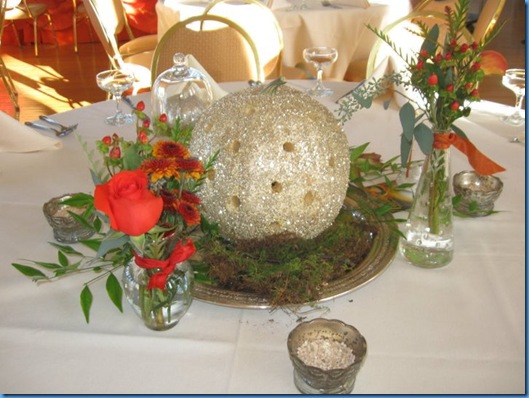 The pumpkins with drilled holes were so pretty at night.  We used a battery operated candle which was meant for Halloween. It glowed beautifully.  Got them at Home Depot. 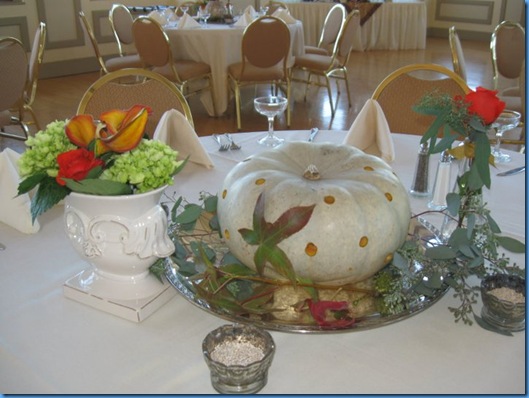 This was the guest book table 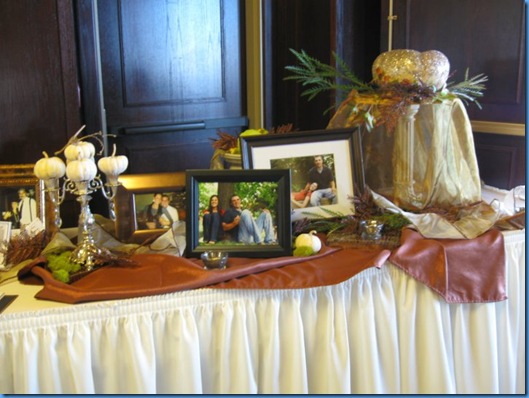 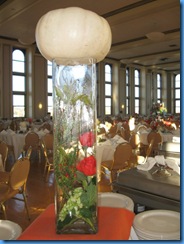 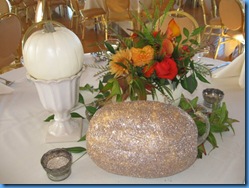 Notice how the lid to the pumpkin is perched on the side of the arrangement.  I loved that!

This is what the table looked like after we cleared everything off the individual tables.  Luckily I didn’t have to take it all home that night.  They gave me a couple of days to wrap all the breakables. 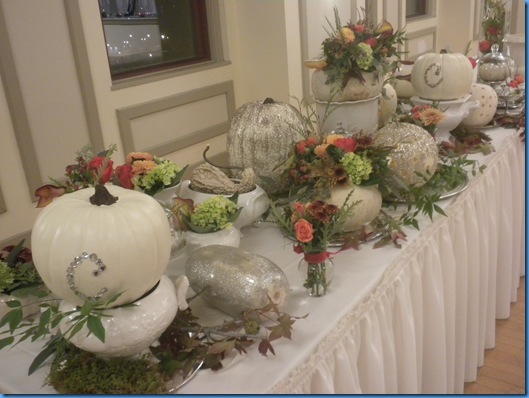 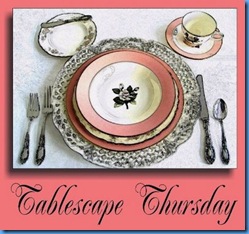 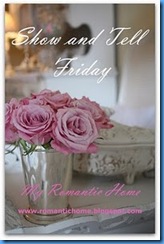 For the first time I am excited to join Cindy at My Romantic Home for Show and Tell Friday!

Thank you so much for stopping by and sharing our wedding reception with me.  Such memories we will have for a lifetime!

Oh, what a wonderful post! I very much enjoyed seeing all the beautiful table decorations! I know your guests loved seeing all the variations on the white pumpkin centerpieces. It looked like a memorable reception! My son is getting married in December, so this was especially fun to see.

Just Beautiful! I love how you used the pumpkins in so many different ways. Such a wonderful reception.
Blessings!
DD

How pretty for a lovely autumn wedding! Love the last pic too -- looks like a gorgeous pumpkin patch!

What a beautiful setting for an autumn wedding. Love the different ways you used the white pumpkins. It is all lovely!
Happy Thanksgiving! ~ Sarah

It's amazing that you collected all of that over a year's time, except we know that the pumpkins and leaves were all garnered at the last month....it was all worth it! So, so pretty!! I love that each one was a little different!

Suzanne
When my daughter gets married, I need to fly you down to help me! :D

This just made my jaw drop! I have never seen or imagined anything like this. I especially love the variety from table to table. I couldn't tell you my favorite! The glitter made everything so special. The monogrammed ones are fantastic. I would have loved to see it in person. Beautiful Tablescape Thursday and what a fabulous wedding.

Stunning! I'll bet that you've received so many compliments from your guests on your pretty decor. I can't wait to show these pictures to Mama when I see her at Thanksgiving.

What fun! I just love the monogrammed pumpkins. You can see all the love that went into this lovely occasion.

I love all of those white pumpkins, those holding flowers the best, I think. Very pretty.

Everything looks beautiful Donna, I know y'all must have had the best time.

I'm headed west nearly to Des Moines right now,can you see me yet? :)

Hi, Donna! As a retired professional wedding planner, may I say that this is VERY well done! I LOVE the pumpkins with the illuminated letters!!! What a wonderful idea! Lots of creative uses of pumpkins and natural elements. I am totally impressed that you kept all those pumpkins in such good shape for such an extended period of time, too! Very nice! Congratulations all around, and I wish you a Happy Thanksgiving!

What beautiful vision you and your daughter had! I love wedding receptions with unusual themes, great job!

The tables were just beautiful. The pumpkins were a great theme and thank goodness for white pumpkins! I love the lit up ones! You really did an incredible job!

Thanks so much for stopping by. I hope Emily has a wonderful time in the Windy City! ;-D

What an absolutely perfect table setting you have created just in time for the holidays. I just love all of the different textures. Have a very Happy Thanksgiving.

HEEEEY!!! Im your newest follower! LOOOOOOOOOOOOVE your site , so many great ideas! Makes me want to run to hobby lobby! Thank you for stopping by my 14 days of xmas trees!

What a beautiful wedding reception. Love the look of all the glittery white pumpkins!

I love that you had a vision and you went for it! The white pumpkins made this a beautiful Cinderella elegant reception for your lovely daughter. Thank you for sharing your creative designs. Wonderful! Cherry Kay

What a pretty Autumn wedding! I love the use of pumpkins and glitter. They remind me of Cinderella! Thanks for sharing.

What a wonderful, magical, beautiful reception. All the pumpkins in their various dress are just magnificent. I love your theme. You have a beautiful daughter and her magical wedding reception was really a sight!

Beautiful and creative arrangements!!
Thanks for checking out my website, SAS Interiors, and leaving such a kind and thoughtful message! I'm now a follower of your site :)

Check back often and be inspired!

So beautiful! It looks as if it all might have appeared with the wave of a magic wand! But we know better after reading your fascinating description of the process of assembling the trays, the urns, the white pumpkins, and so on. You should be very proud of what your time, energy, and talents accomplished here.

It's all beyond beautiful! Speaking of beauty, I checked out your previous post about the wedding. The bride, her sisters, and the wonderful mother-of-the bride looked absoulutely gorgeous!

Hope you have a very Happy Thanksgiving!
Bill

Gloria, thank you for sharing....it all looks so beautiful. Now, if only I can talk my girls into a fall wedding I can just use all of your ideas! (my oldest is only 16 so I have plenty of time to convince her!) Happy Thanksgiving. Enjoy the time with your family.

and I feel like a dork, because I called you Gloria and I know full well that you are Donna....sheesh...Thank goodness it's Friday!

Donna, how very creative you are! You did a marvelous job of decorating for the reception. You gave your daughter a special event she will never forget. Beautiful job!!!

WOW! I love this unique slant on a reception. It is so refreshing to see something different. Too often the receptions get bogged down with the "same ole, same ole'". Beautiful job!! Kudos for the thrifting.

Thanks for visiting and for your sweet comments.
Ginger

Stunning! Such a glittery array of fresh flowers & all those WONDERFUL WHITE pumpkins...outstanding decorations!!!

I know the night must have been magical...I kept thinking of "Cinderella" as I viewed each photo.

Your daughter made a beautiful bride & I hope they enjoy a lifetime of happiness together.

Have a Blessed Thanksgiving, Donna!

Hi Donna,
What a beautiful reception! I got married in October (back in the day) and I sure wish I had your creativity back then to put together such a gorgeous fall themed reception. I love all the variations in the pumpkins....such a neat idea! And I also love how you found thrifted items to use on your table displays.
Congrats to the bride and groom.
You can sit back now and enjoy the holidays!!
Jane